Roman Times Quarterly is a publication providing insight on the very best of ancient Roman life.

A Summary of This Issue from the News Reader in the Forum:

Herodotus was, of course not the first to write of the ancient world's geography. He was preceded by those who had drawn up the "maps of earth by those whom he identified as those "Ionians." It appears that Herodotus disagreed with these Ionians in several respects:

The efforts of Herodotus are certainly not up to today's standards by any mark, however they are in fact far ahead of those geographers who worked in the years prior to Herodotus. However, he stands head and shoulders above those like Anaximander and Hekataios, both of which were from Milisia, and who had published treatise on geography prior to Herodotus' time.

Homer and Hesiod also drew "symbolic" maps with the verses of the works on the shields of Achilles and Herakles. Herodotus challenges both of these poet's by saying:

"I have no certain knowledge that . . . a river Ocean exists, I think rather that Homer or one of the poets before him invented the name and introduced it into his poetry."

In this period it was considered that the known world was a round disk, and all around the border of this disk flowed a never ending river called "Ocean." Herodotus doubted this idea particularly in the far northern and eastern reaches of the known world. This was a pretty extraordinary thing to say in those days since the period culture considered the poets who were authoring great epics to be inspired by divine power and to be the keepers and preservers of all historical memory. This important challenge required a strong reliance and belief on what we today call the scientific method.

Herodotus required specific evidence supported by eyewitness determination. The Ionians had developed this circular map in theory by the sixth century BC which featured polarities, symmetry, and geometrical designs, all of which were not supported by eye witness reports. Herodotus with his view of determination that the map should be corrected by eyewitness reports, sought to change this map into something more realistic that matched the world around him.

Vinum Romanum: An exploration into the Wines of Ancient Rome

by Lucius Vitellius Triarius, Part 1 in a 4-part serial

Part 1: The Origins of Roman Wine

Wine has been with us since the discovery of the gift of the vine occurred in a very remote epoch. Evidence of the grape vine in antiquity has been found from the Caspian to the Indian Ocean to the Himalayas, thus being of olden times in the cradle of civilization. When we consider the process of making wine in its most simple form, it is of no surprise to find that mankind has embraced it for what seems to be time immortal.

In tracking the history of the grape vine, we are reminded of the heroic Greeks and the vivid pictures of many and writings of Homer of the toils of the vineyard in daily life. From the Hellas prospective, Homer suggests that wine originated along the coast of Thrace, also the same region of the more remarkable exploits of Bacchus. Thus, we may infer that the Pelasgians introduce the culture of the vine to others as the traveled westward across the Hellasport and into the Po valley, and then on their way around the head of the Adriatic. According to legend, wine was both rare and costly in the earlier periods of Italian and Roman history. According to Pliny:

"Romulus is said to have used milk only in his offerings to the gods. Numa, to check extravagance, prohibited the sprinkling of wine upon the funeral pyre, and, to stimulate the energies of the rustic population, he ordained that it should be held impious to offer a libation to the gods of wine which had flowed from an unpruned stock. So scarce was it at a much later period that Papirius the dictator, when about to join in battle with the Samnites, vowed to Jupiter a small cupful (vini pocillum) if he should gain the victory."

Knowing nothing of distillation in the early periods, wine production was a considered a rare product to the Romans in that it in many cases was not an especially preservable commodity as such over time.

In 37 BC, Varro wrote Res Rusticae ("Country Matters"), a manual on farming, in which he suggests in his discussion of viticulture that some grapes produce wines that must be drunk within a year, before they become too bitter, while others, such as Falernian, mature with age and increase in value. A century later, Pliny was to say that nothing experienced a greater increase in value than wine that had been cellared up to twenty years or a greater decrease in value afterwards (XIV.57). Good wine in the early periods was racked off and stored in cellars as early as the period of the Gracchi. William Ramsay, M.A., Professor of Humanity in the University of Glasgow, speaks of this in reference to the Vinum Opimianum:

“The year B.C. 121 is said to have been a season singularly favourable to all the productions of the earth; from the great heat of the autumn the wine was of an unprecedented quality, and remained long celebrated as the Vinum Opimianum, from L. Opimius the consul of that year, who slew C. Gracchus. A great quantity had been treasured up and sedulously preserved, so that samples were still in existence in the days of the elder Pliny, nearly two hundred years afterwards. It was reduced, he says, to the consistence of rough honey, and, like other very old wines, so strong and harsh and bitter as to be undrinkable until largely diluted with water. Such wines, however, he adds, were useful for flavouring others when mixed in small quantities.”

~ William Ramsay article, A Dictionary of Greek and Roman Antiquities

But, at this time, no specific distinction was made of wine from different localities. Identification was made by marking the container with the name of the Consules alone. Later, the process was to mark tags attached to glass containers.

Foreign vintages were considered far superior to the native Roman growths early on. Some were so precious that the Greek vintages were so highly esteemed in the times of Marius and Sulla that a single glass only was offered to guests, and then only on the occasion of a banquet.

In his 3rd Consulship (46 BC) Gaius Iulius Caesar presented for the first time four different wines on the occasion of a feast. Pliny advises that, during his time, the number of wines worldwide, being those of high quality, numbered eighty, of which Rome claimed 2/3 of the varieties. He asserts that the total number, including all qualities, were around 400.

PART 2: The ancient process of making wine...in the next issue.

The Spanish city of Alicante borders on the Bay of Albufereta. This refuge is an excellent one as it is protective of Navigation and provides a protection from both the East and North winds which sweep the Mediterranean. The bay is located between the Cape of La Huerta and the Serra Grossa or de San Julian farther to the West.

In earlier year there was found between the two above promontories a small lagoon which drains water from the Maldo Ravine. The area of this lagoon and was approximately 3 hectares in size with the area most often flooded about one hectare in area. The lagoon area lay in the depression in a generally North-South line. This orientation can be seen in the below map of the lagoon drawn sometime in the 17th century. 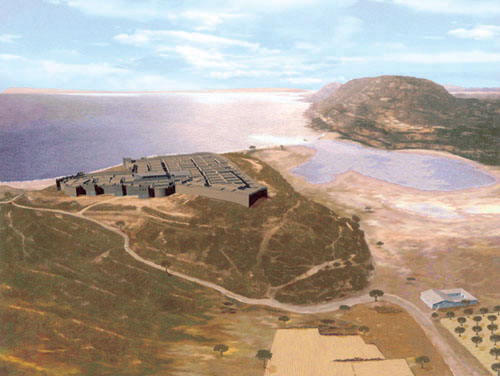 Apparently during ancient times this lagoon was flooded to a higher level which pushed to water level to the steeper slopes of the area to the Northeast. This gave ancient peoples the opportunity to utilize this lagoon area as a sheltered inland port. This excellent shelter from the storms along the Spanish coast would have made this lagoon a very popular commercial port in ancient times.

The article is an interesting one for two reasons, The first is the detailed picture of a “Cleopatras Cartouche” cut into stone, with each of the letter sounds of her name as symbols, and explained in the description. Additionally there are photos of the presentation of Cleopatras son to the gods, a photo of the bust of Cleopatra and the bust of Octavian as Augustus, wearing the Civic Crown.

The second is that the story itself is fascinating as it departs from the traditional love and tragedy story where Cleopatra commits suicide with an Egyptian asp.

Apparently there were in ancient times several stories about how Cleopatra died. There was one story about a poison which was concealed in a comb. In the book, The Mysterious Death of Cleopatra, by Pat Brown who is an experienced homicide investigator and criminal profiler she investigates the death of the queen. Her investigation moves through the findings of the underwater archaeological findings of ancient Alexandria, to an Egyptian snake venom expert, and on to the National Poison Center in New Zealand, and she weaves a very different story in regard to the demise of Cleopatra.

The story is quite interesting and it makes a lot of sense as explained against the background of the Emperor Augustusʼ rise to power.

Last year an archaeological discovery team from New Hebrew University led by Professor Ehud Netzer announced the discovery of the tomb of King Herod the builder of the port city of Caesarea, the Second Temple on Temple Mount in Jeruselum, and the Gerodium, his escape palace in the desert. At the time of his announcement there were several who indicated that the announcement and identification of the site was “plausible but unproven.” 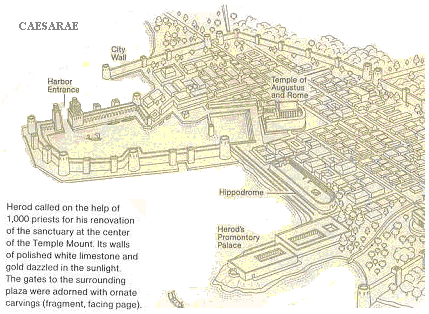 This year after considerable work and effort Prof. Netzer has again made the claim, fortifying his idea with the following further information:

First, reconstruction of the burial mausoleum at the site indicated that the structure was built in two stories, and had on top of this building an 80 ft high peaked conical roof. Prof. Netzer is confident that this extreme structure was in keeping with Herodʼs ideals of construction;

Second, the burial sarcophagus found at the site had been completely destroyed, broken into many pieces with hammer marks still much in evidence on the pieces. This damage is placed at the feet of the Jewish rebellion against Roman rule in the year AD 66. Prof. Netzer believes that these rebels considered Herod to be a puppet of the Romanʼs and believing the sarcophagus to hold the remains of Herod scattered the remains and destroyed the container in vengence against his agreements with Rome. 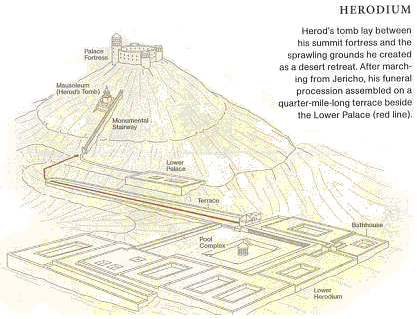 Third, the place at which the burial chamber was found has been identified as the “Herodium”, the desert palace built for Herod as a getaway refuge, This lavish construction had a detailed coverage in the books qritten by the Jewish historian Josephus. The burial chamber was found in a niche about mid-way up the mound found in the desert some eight miles to the South of Jeruselum. This mound which is 300 ft. high is obviously artificial, and the palce structures are fond at itʼs base. At the time of building the mound had on itʼs peak a fortress as a place to retreat if the palace came under attack. 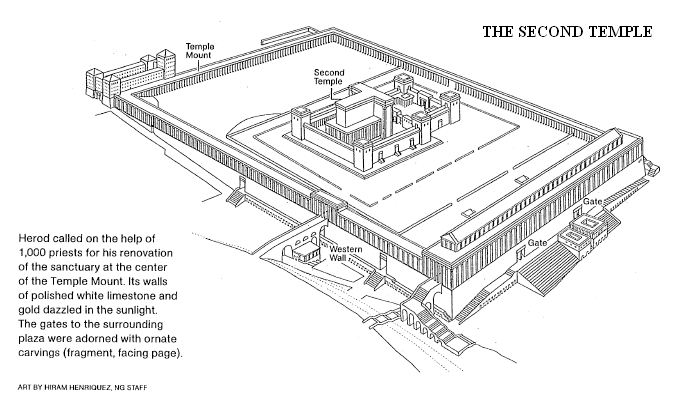 If there is any further interest in this discovery, I would be pleased to follow up this article with one which describes the original discovery of the mausoleum last year. 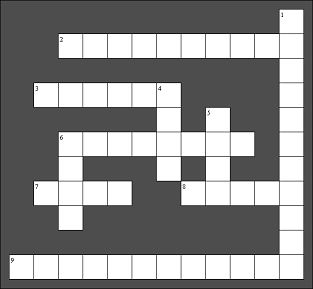 Visit us online at: http://monsaventinus.wikia.com/wiki/Roman_Times_Quarterly

Retrieved from "https://monsaventinus.fandom.com/wiki/Roman_Times_Quarterly/QTR_1_2009?oldid=5562"
Community content is available under CC-BY-SA unless otherwise noted.