Start Your Journey Through the Aventine and Roma[edit | edit source]

You have just disembarked a merchant ship, the Nauta Tiberia Octavia, which has brought goods from Ostia to the Port Tibernius, Rome's premier port, situated between the Palatine, Aventine, and Capitoline hills. From here you will find several primary sites in the Aventine to visit, as well as the homes of some of our Plebeian cives. 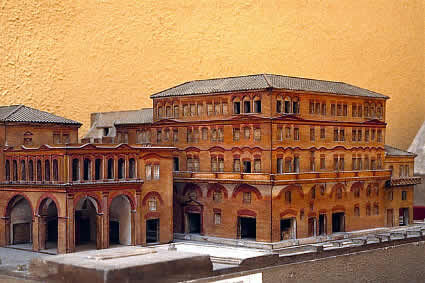 In Roman times there were many types of houses you could live in.

The DOMUS, which is one of the largest houses the Romans had in the city, was the only house that one family lived in. Which consisted of two floors. The richest families in the city lived in these homes.

An INSULAE, shown in the picture above, was where the “poor people” resided. It had three or more floors that had little rooms in them where a whole family lived. The rooms got light only by a little window that did not contain any glass. Collapses and fires occurred often in these homes. The ground level consisted of little shops.

The last living settlement is the VILLA-COMPLEX. About ninety percent of Romans lived in the country, some lived in poor farmhouses, but the rich lived in a villa-complex. These consisted of three parts: Villa urbana- this was the living quarters of the family; Villa rustica- the was where the staff lived and worked (it was also the stables, a hospital, and a prison); and Storage accommodations - this was where they stored the grain, oil, wine, and other items that were made on the premises. These are the three most common types of housing settlement that the Romans lived in.

The news reader informs you that if you wish to visit the domus of a certain citizen, you just need to ask around on the following main streets:

You see the news reader in the Forum Boarium, and ask him for directions to some of the interesting places in and near the Aventine. He gives you the following information:

Retrieved from "https://monsaventinus.fandom.com/wiki/Port_Tibernius_(Mons_Aventinus)?oldid=5155"
Community content is available under CC-BY-SA unless otherwise noted.